Our eager EcoChiefs decided they would like to take part in this year's RSPB Big Schools Birdwatch to see how many birds they could identify in our school grounds.

With clipboards and binoculars at the ready the Chiefs headed out onto the playground at the start of the day on February 4th and watched carefully as lots of birds joined them in the trees and organic garden ready to be counted.

In 20 minutes the EcoChiefs managed to record the following on our school site:

1 Pied Wagtail who greeted everyone as they started their count.

Thank you to the EcoChiefs who will be sending their count to the RSPB to help them with their Citizen Science Project. A GREAT RESULT FOR OUR SCHOOL!! The whole school held a Reindeer Run to raise money for Phyllis Tuckwell Hospice. All the children 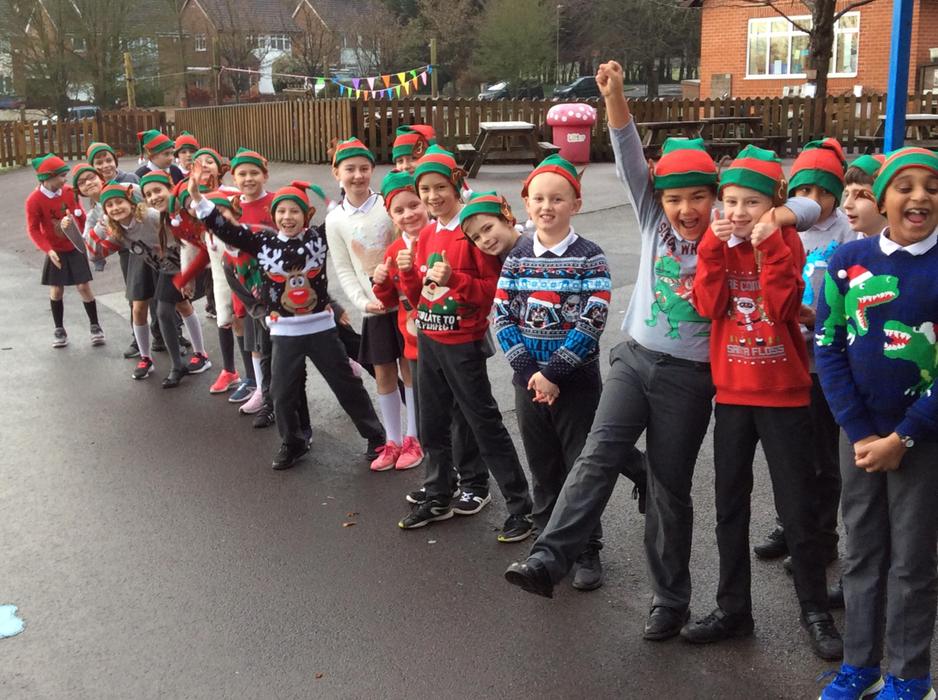 were given hats complete with elf ears to wear and they were sponsored to complete laps of the playground. An amazing £2171.91 was raised for this fantastic local cause. Thank you to all who supported the children. 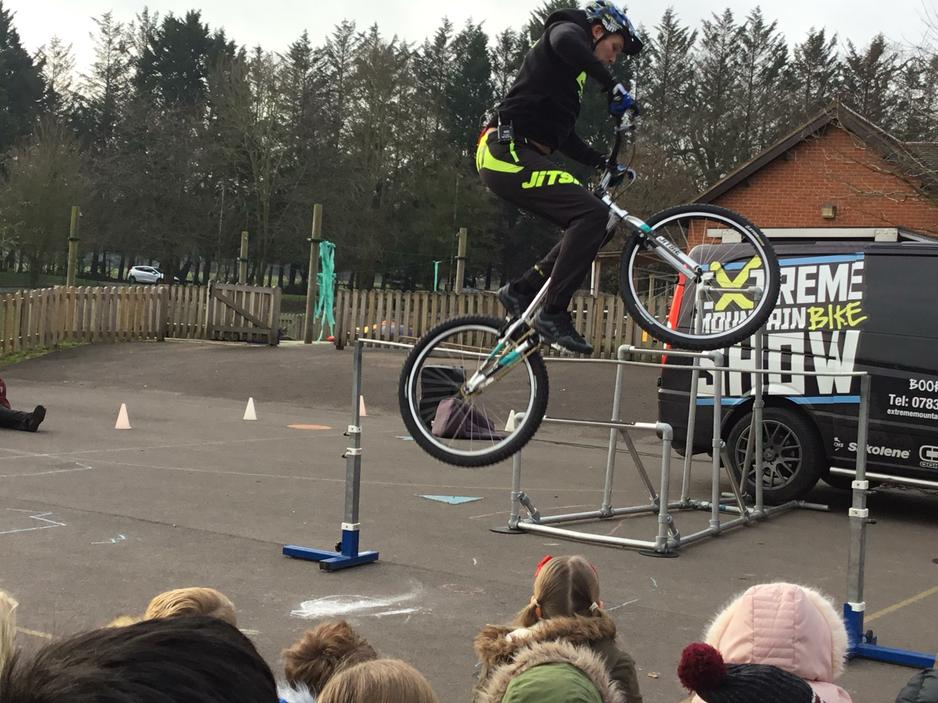 Danny Butler, who has won medals for his extreme bike stunts and represents Team GB, visted the children to demonstrate his skills and talk to them about developing resilience and confidence. Danny was bullied when he was younger and now enjoys visiting schools with an upbeat  message about developing belief in yourself and inspiring others 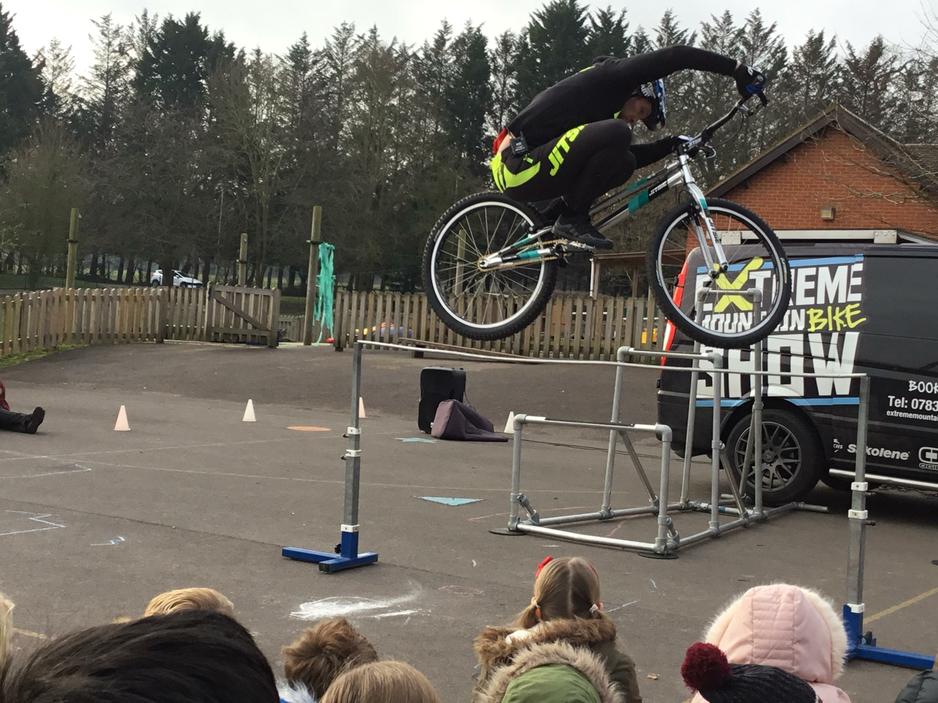 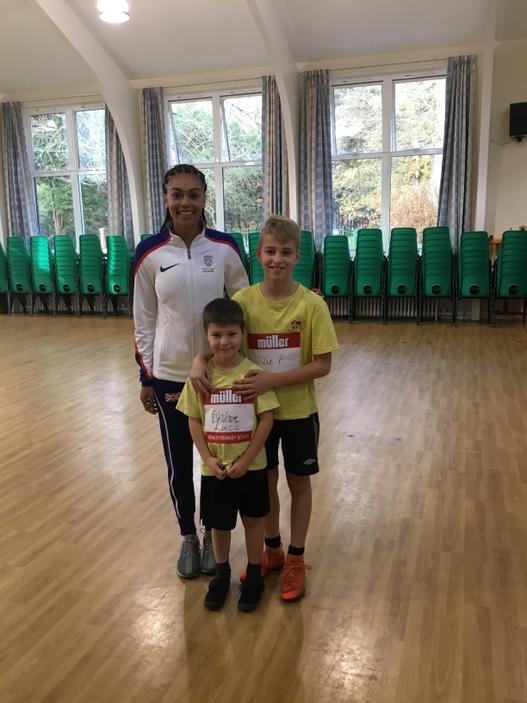 Company won by a family who have children at our school. Adelle spoke to the children about her experiences competing as part of the GB Team and then supervised some training sessions for the children in their individual class groups. 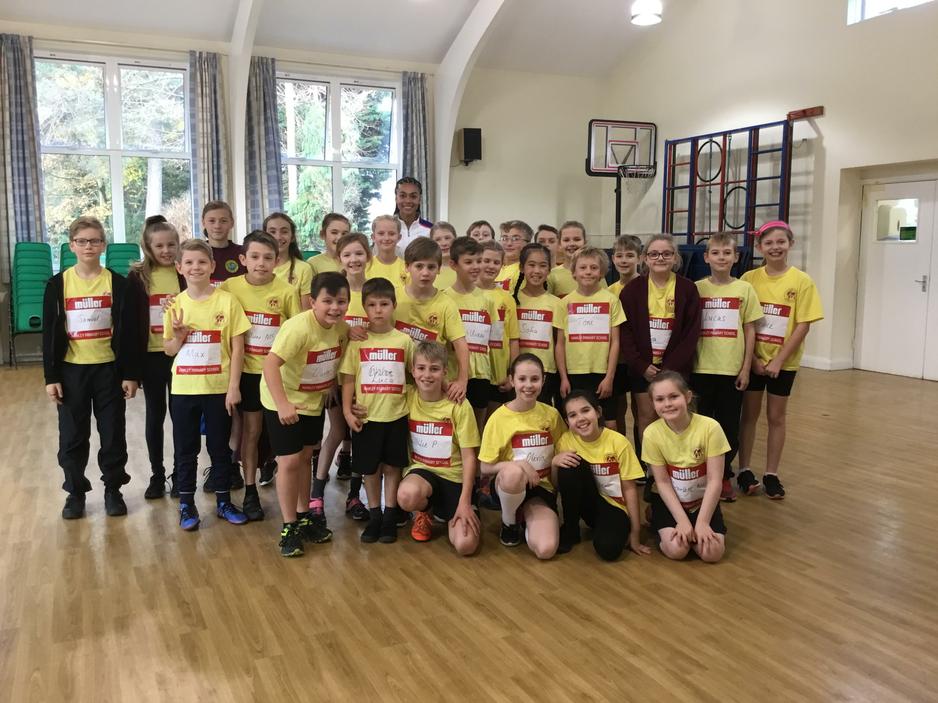 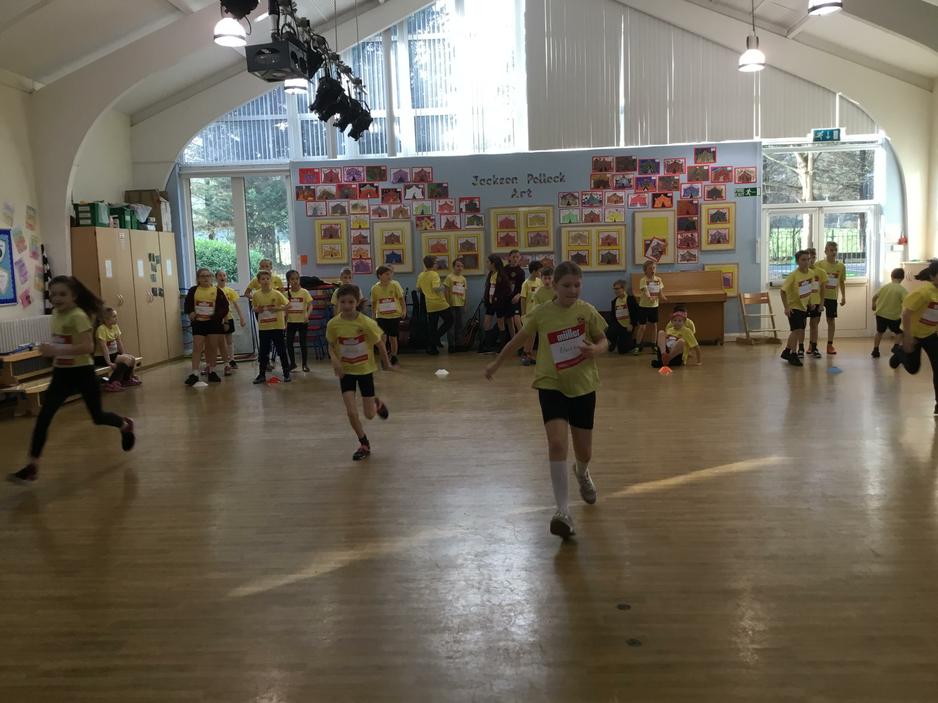 Visit from the Circus The Hawley School Association organised a visit from Happys Circus in September so it was decided to focus the whole school curriculum on the theme of Circus during the first part of the Autumn term. The children have been learning all about the different characters in the circus and exploring and deciding where would be the best location to site their own circus amongst other things. There was great excitement when the Big Top arrived and was erected on the school field and the show in the evening was very well received with all the children and parents attending having a great time. After the visit from the T-Rex in March every year group emmersed itself in the a dinosaur topic resulted in some wonderfully creative work which was displayed for parents to see before the Easter break. 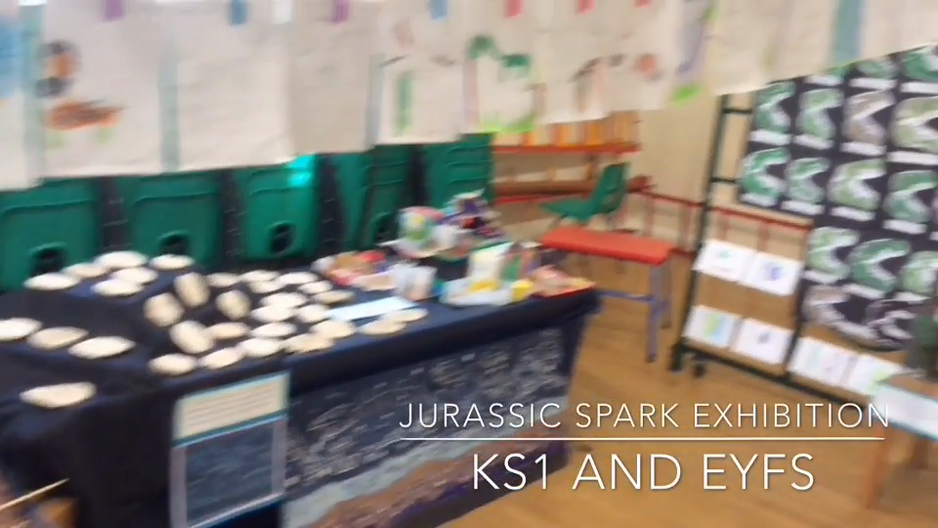 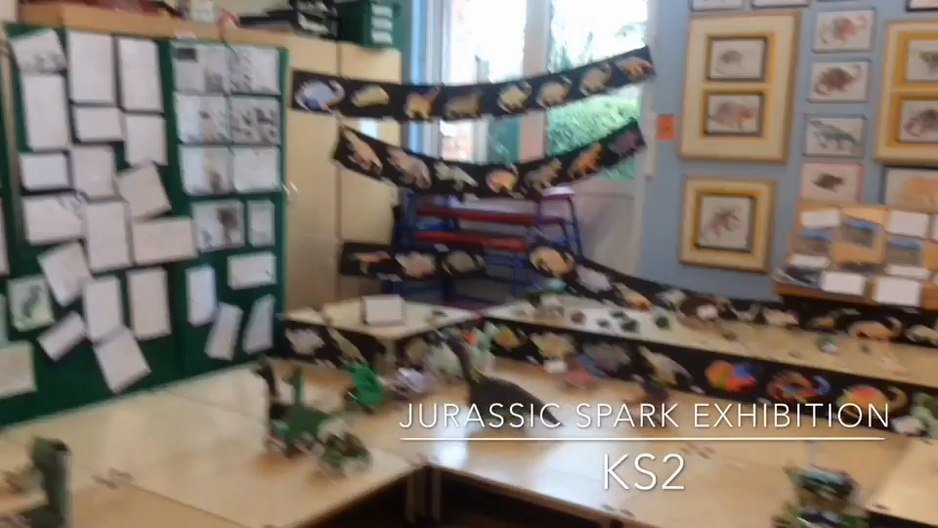 The School Council organising lots of fun sporty activities for the children to take part in during the morning of Sport Relief Day on Friday 23rd March. The children were also invited to dress up in their favourite sports gear for the day in return for a small donation to this charity. Everyone had lots of fun and a total of £307.44 was raised! 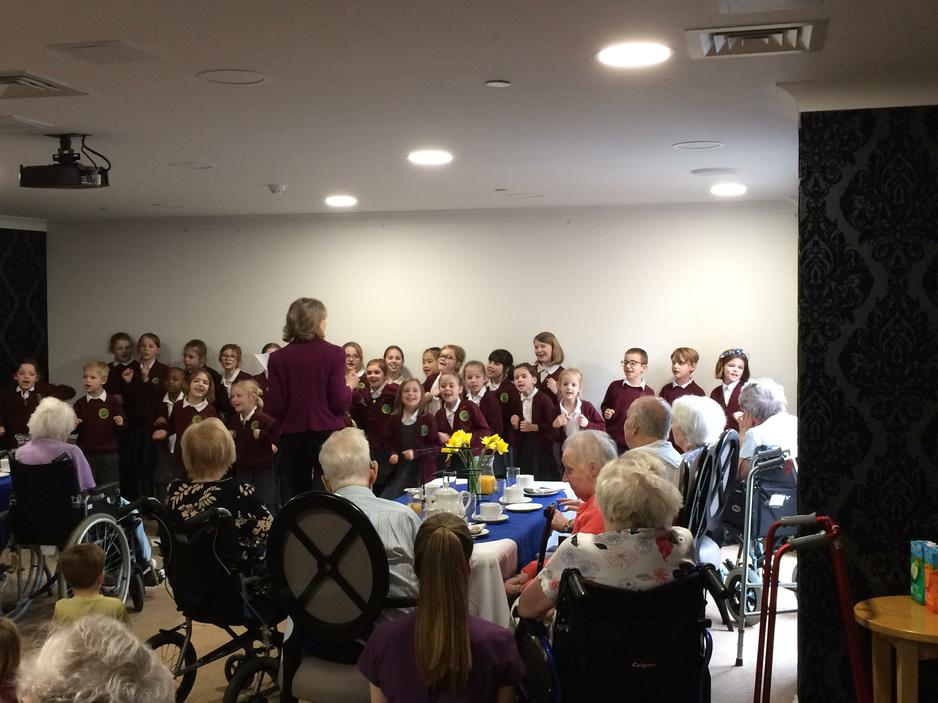 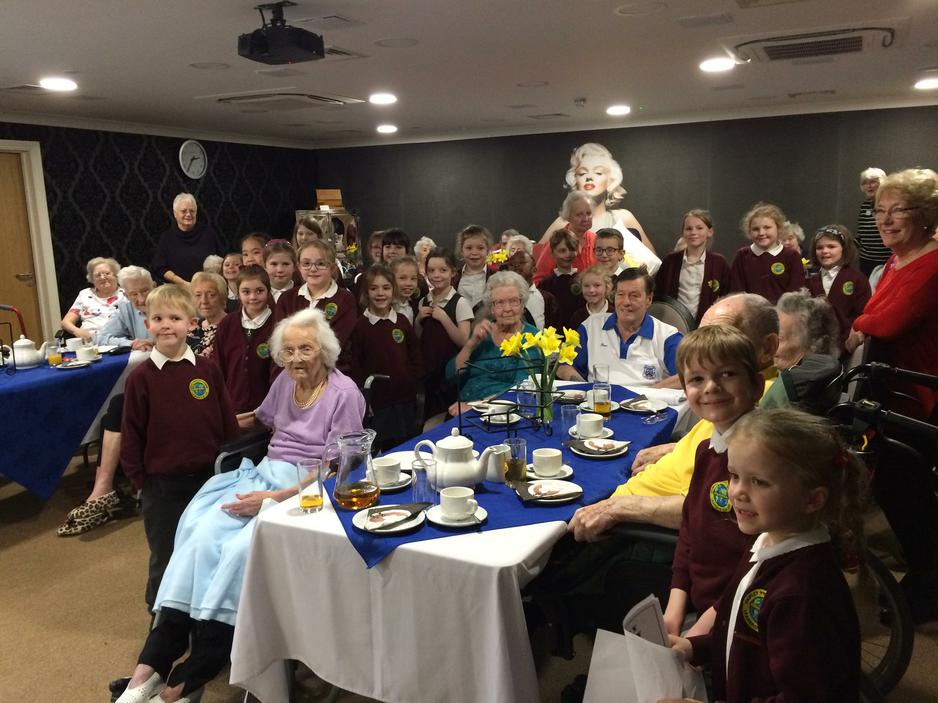 Gracewell, a care home within our community, to sing a variety of seasonal songs. The residents were delighted to welcome our children and all commented on the lovely singing and excellent behaviour. Well done to the members of the choir.

The Day the Dinosaur came to School

The children had a big surprise during assembly on 6th March when a Ranger came in and interrupted Mrs Galpin as he had lost his pet, Rex. The children agreed to help call for it and eventually found they were joined by a 17ft tall Tyrannasaurus Rex! Both he and the Ranger spent some time with the children enjoying the attention and teaching them some songs. This was followed after break with a question and answer session.

The whole event has launched a four week whole school project which will include creative writing, art, history and design technology. 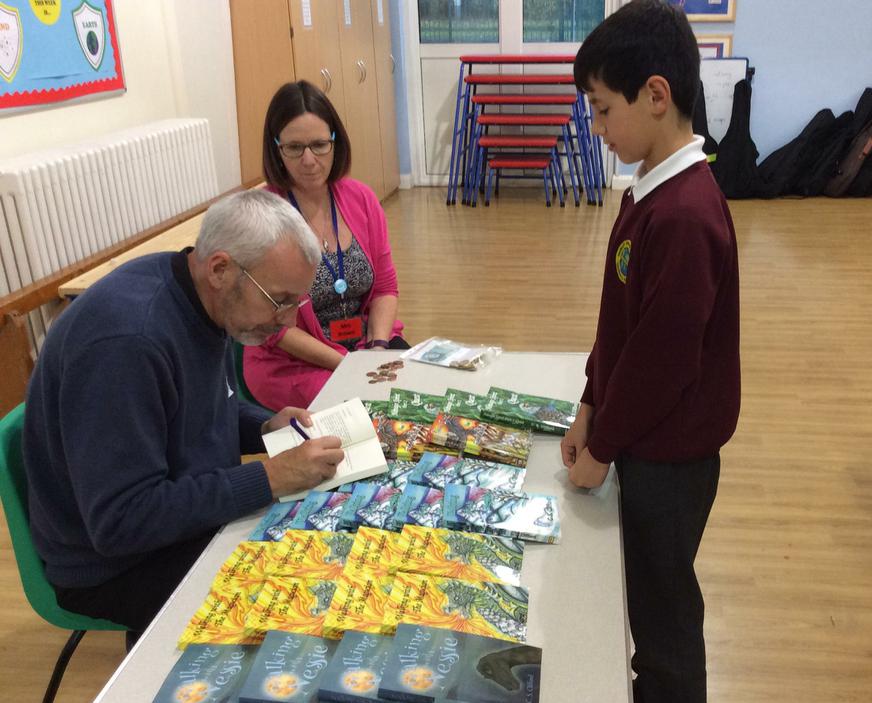 The children in KS2 were fortunate to be visited by Steve Gifford, author of the 'Walking With' series of books in November.

Steve’s visit involved an interactive presentation, telling the story of two young teenagers who discover a portal. Every time they venture through they are transported back to the past where they take on the bodies of people from that time period whilst retaining their young minds. After the presentation, Steve held writing workshops in each KS2 class promoting reading and inspiring the children’s’ creative writing. 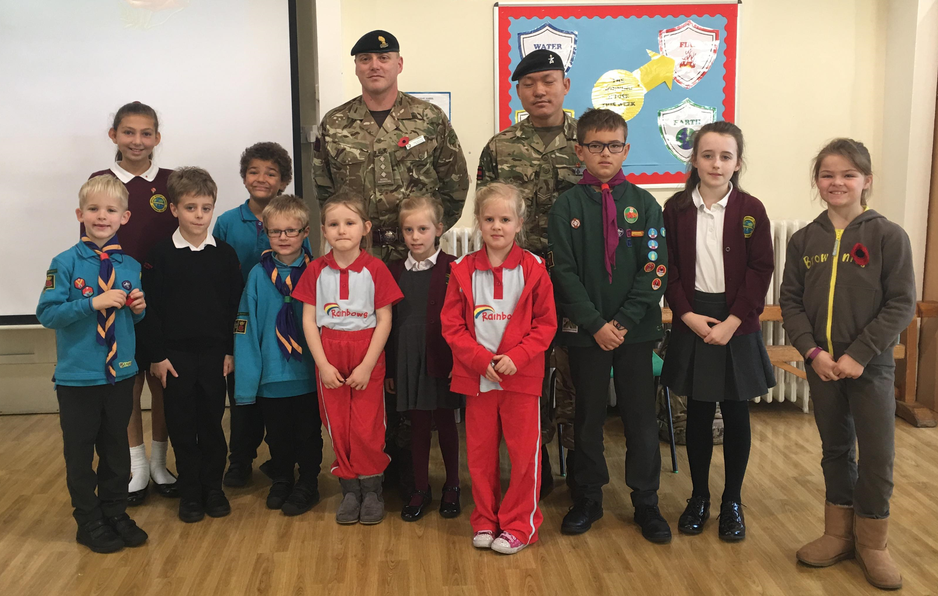 Assembly of Remembrance on Friday 10th November. The children all listened in earnest to readings and recollections during the assembly with many children dressing in Scouting or Guiding uniforms to mark the occasion. 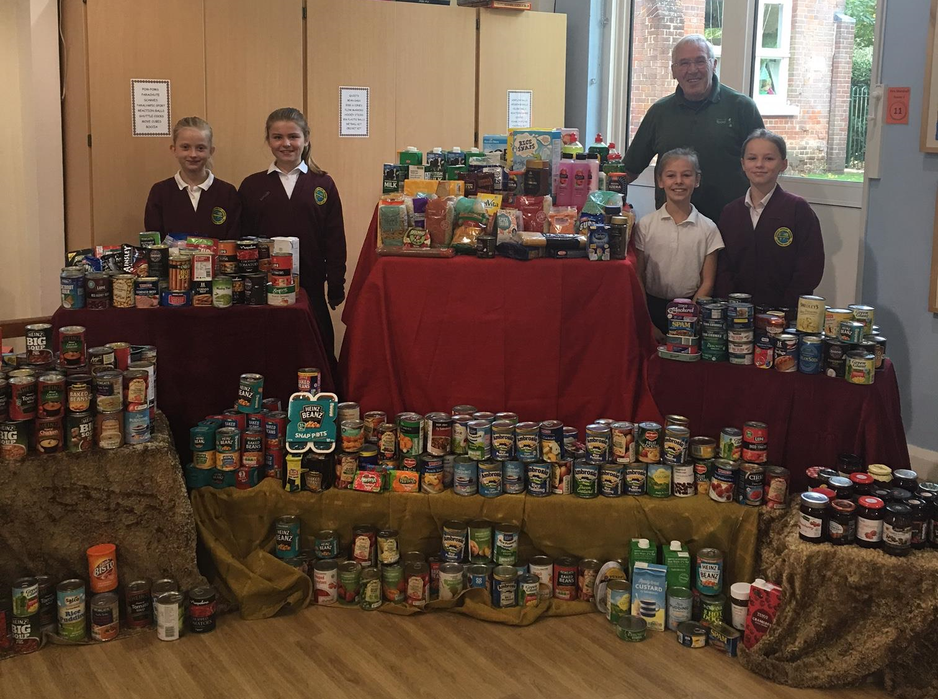 The children gathered together to celebrate Harvest Festival this year with Harvest songs and poems from KS1 and Early Years and a retelling of The Greenling by Levi Pinfold from KS2. The parents were very generous as always with their donations of food which this year were given to the Farnborough Foodbank. We were delighted to discover we donated 236.1kg of food to this worthy cause. 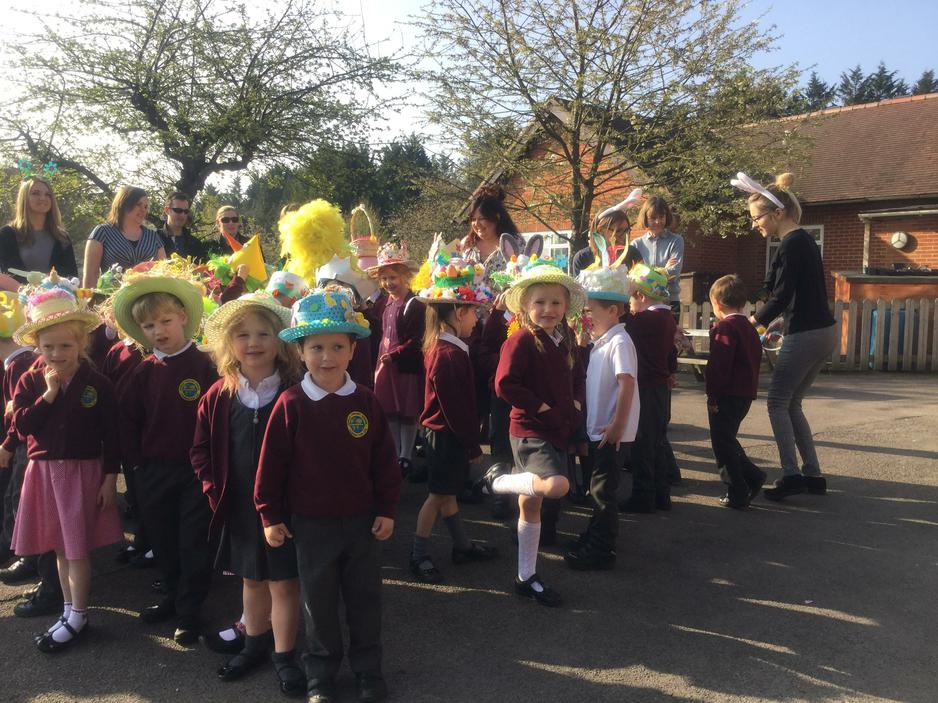 able to show off to the staff and parents during our annual Easter Hat Parade. 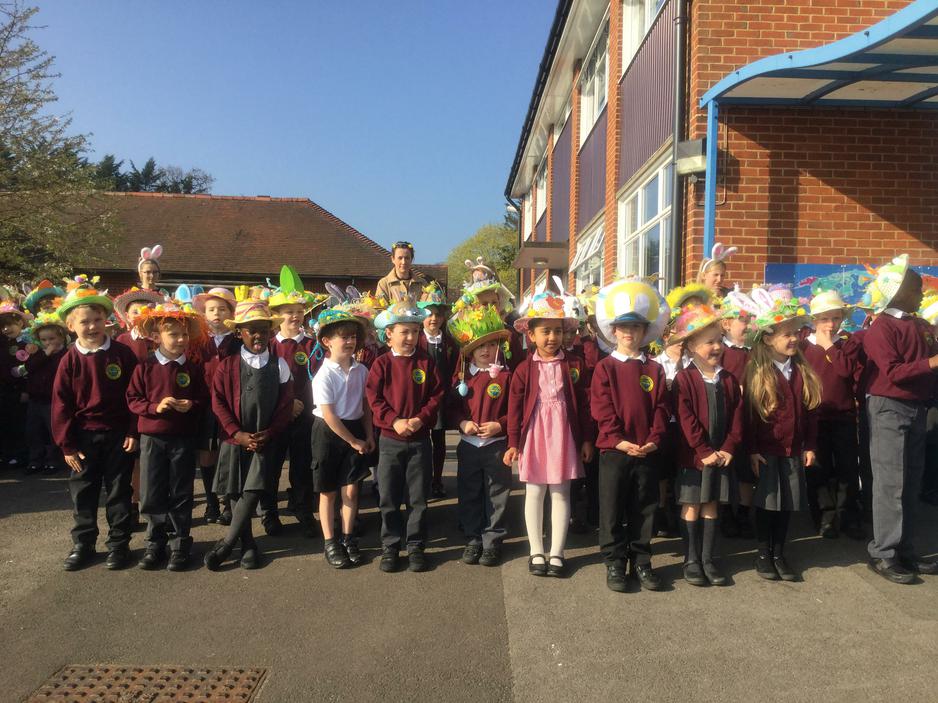 To celebrate Mother's Day we invited Mums, Grans and Aunts to have lunch with the children at 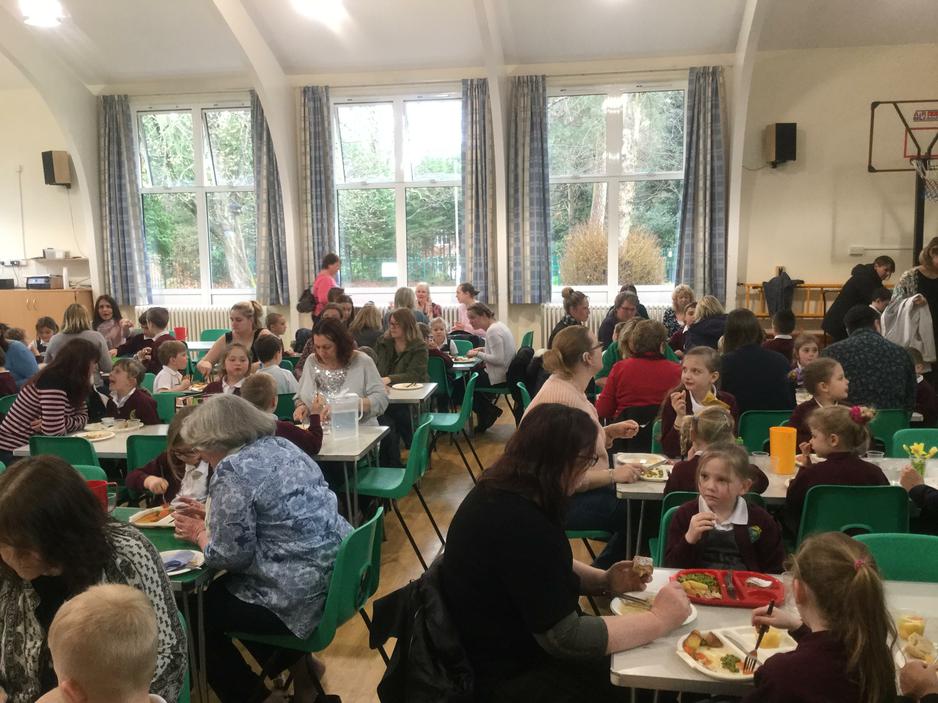 Hawley. We welcomed 275 adults over two days who enjoyed a lunch of Roast Chicken or Vegetarian Sausage Puff beautifully cooked by the kitchen team who had the mammoth task of preparing over 650 meals during the two lunchtimes. 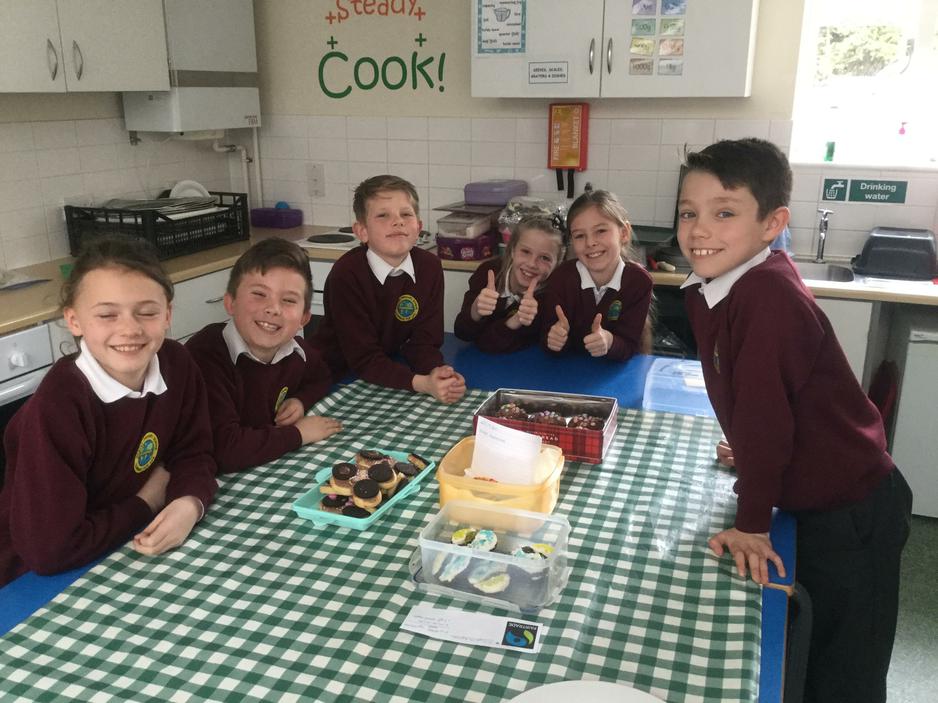 amazing results. Children in EYFS and KS1 were invited to make biscuits and the children in KS2 were invited to make cupcakes to be entered into the Bake-Off. Each entry had to contain at least one Fairtrade ingredient and each entry was judged on taste, presentation and how well it fitted the Fairtrade brief.  Well done to the winners who were; EYFS & KS1 Tia A and KS2 Kieran H . The biscuits and cakes were sold at the end of the day and as a result the Team are able to donate in excess of £200 to Fairtrade.

Our School Council wanted to support the NSPCC and to raise funds for the charity they decided to run a sponsored Dance-a-thon on Friday 10th March. The whole school were invited to take part in the dancing which took place during the day, either in individual classrooms or as a 'flashmob' on the playground. Please take a look at the video below to see the children in action.

This year for World Book Day we decided that instead of dressing up, we would all bring in our 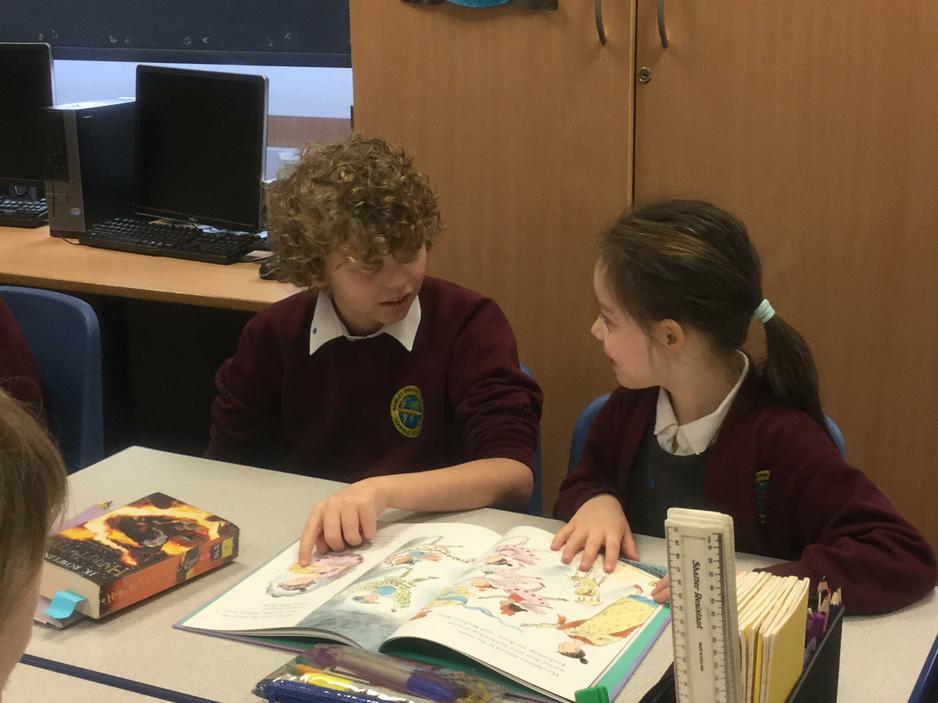 favourite book to share with others. The children had a lovely day sharing their books with friends across the year groups and all enjoyed the 'Mystery' Readers (unexpected guests)that appeared in their classrooms at 3.00pm to read them a story. 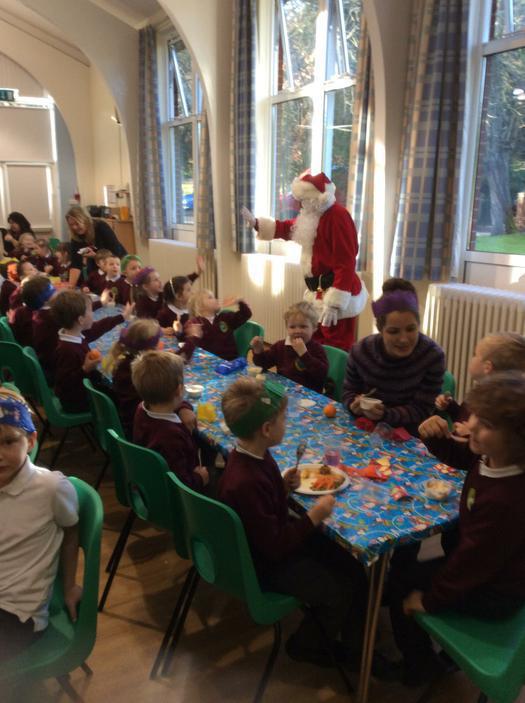 together to enjoy Christmas dinner. We even had a special visitor!

At the end of October the children at Hawley joined forces with children from our 'cluster' of local schools to create 'A Right Royal Exhibition' at Frogmore Infant School. The royal theme was interpreted differently by our different year groups and we produced portraits using paint, collage and ink, crowns using card and clay, teapots and teacups from papier mache and a brick wall portrait in the style of Banksy. 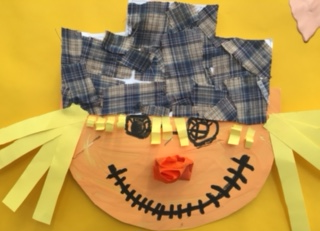 We held our traditional annual harvest celebrations again this year on Thursday 29th September and as usual we received very generous donations of produce from our parents which this year have been donated to the ‘Hart Foodbank’.  The Foodbank offers to help feed local people in crisis through the provision of emergency food supplies donated by churches, schools, businesses and the general public. As well as receiving nutritionally balanced 3 day food parcels, people are welcomed with a cup of tea, listened to and sig 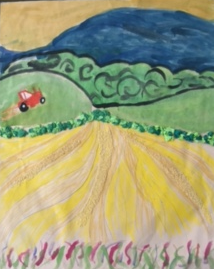 nposted to agencies that are able to help resolve the underlying cause of their problems.

Unfortunately not the ones with chocolate chips.

Some cookies are necessary in order to make this website function correctly. These are set by default and whilst you can block or delete them by changing your browser settings, some functionality such as being able to log in to the website will not work if you do this. The necessary cookies set on this website are as follows:

A 'sessionid' token is required for logging in to the website and we also use a 'crfstoken' token to prevent cross site request forgery.

Cookies that are not necessary to make the website work, but which enable additional functionality, can also be set. By default these cookies are disabled, but you can choose to enable them below: